MI Abaga are currently entertaining Nigerian Hip-Hop fans on Twitter as they get petty with each other with som petty tweets.

It isn’t news no more that there is an on-going beef between the two Nigerian rappers as they made a diss track for each other last week. However, Vector didn’t think the one diss track he used in going after MI was enough as he dropped another one yesterday titled “Tetracyclin” and tries to go for the jugular.

Since “Tetracyclin” dropped, MI has on different occasions described the song as wack. However, fans have started to pile more pressure on MI to man up and reply Vector rather than hide behind his phone key pads to deliver a reply. How MI responds to this was what fans were waiting for until a conversation occured between him and Vector which was all shade of savagery. 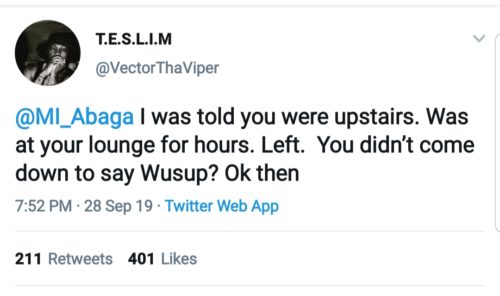 “Vector & MI Abaga Engage In Savage Conversation On Twitter || See Screenshot Images”, 1 out of 5 based on 10 ratings.

Coronavirus: FG will not stop Nigerians from travelling to China –...

Why People Think Kyari Was A Cabal In Buhari’s Presidency –...