The Nigeria Football Federation (NFF) have confirmed the return of Super Eagles coach Salisu Yusuf who was banned from football for a year for collecting bribe.

Yusuf was found guilty of collecting bribe after he was caught on camera collecting N357, 000 ($1,000) from journalists posing as football agents who wanted him to select two players for the 2018 African Nations Championship (CHAN).

The act was shown in a documentary that highlighted corruption in Ghanaian football by the BBC African Eye.

After the video was published, the 57-year-old was given a one-year ban from football by the NFF Ethics Committee.

After serving his ban, the NFF have announced the return of the former Enyimba and Kano Pillars coach.

According to a statement from the NFF, Yusuf will now continue in his position as coach of the Super Eagles home-based side, Nigeria’s U23 side and assistant to Gernot Rohr.

Coach Imama Amapakabo who had been acting in that capacity will now step aside.

“The Nigeria Football Federation has noted that the Chief Coach of the Super Eagles, Salisu Yusuf has now fully served the one–year suspension clamped on him last year,” NFF’s statement reads.

“The Federation thanked Coach Imama Amapakabo for his sterling efforts while in charge of the U23 National Team in the absence of the suspended Yusuf, and for eventually seeing to the team’s qualification for the U23 AFCON.“ 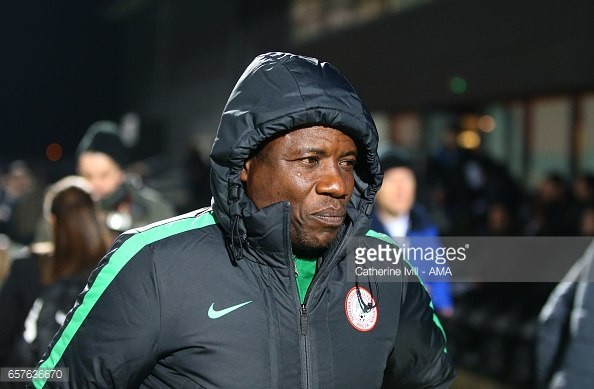 In an investigation led by Ghanaian journalist Anas Aremeyaw, reporters posing as football agents for some players approached Yusuf in September 2017 for a conversation about players’ selection.

During the conversation, they handed the Nigerian coach N360, 000 ($1000) and alluded to more cash incentives if he selects their players for CHAN 2018 which held in Morocco

The meeting happened in Ghana during the 2017 WAFU Cup where Nigeria finished second after losing the final 4-1 to host Ghana.

“So if anything goes through and these players are able to get their contracts, you will get 15% of that contract,” one of the reporters posing as an agent told Yusuf to which he replied; “they will be in CHAN.”

The two players-Osas Okoro and Rabiu Ali– were eventually selected for CHAN 2018 although the investigation stated that there is no suggestion that the money given to Yusuf influenced the selection which the Committee also agreed to.

“You know in football it is supposed to be consistency and form,” Yusuf is heard telling the reporters in the clip.

The 56-year-old coach initially denied any wrongdoing, insisting that he did not promise or committed to selecting any player.

He also claimed that he never asked the reporters for money and that it was just offered to him. The coach also clarified that he received $750 not the $1000 claimed in the report.

He also claimed that he viewed the money as a trivial and symbolic value which falls within the gifts FIFA code allows for and that his influence over the players’ selection was never affected.

He had also believed that he was never in breach of FIFA or NFF ethics code.

One of the most respected coaches in Nigeria, he worked as assistant manager of the Super Eagles under Stephen Keshi, Sunday Oliseh and Samson Siasia.

Yusuf led Kano Pillars to the Nigerian Professional Football League (NPFL) title in 2008 and Enyimba to domestic Cup success in 2013.

Kenyatta Re-Elected With 98% Of Vote – Commission

“I’m Going To Build My Fans A House” – Cynthia Morgan